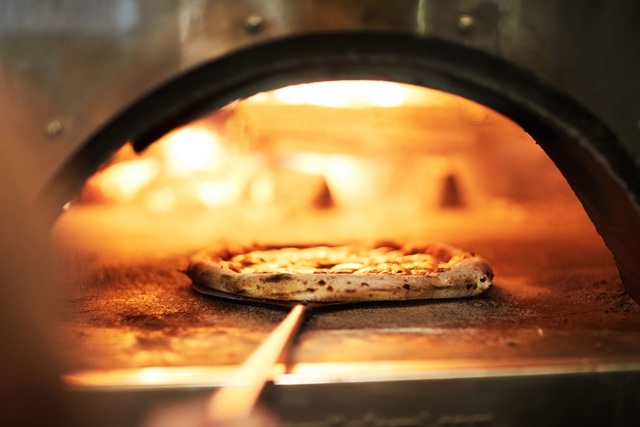 What is the real history of pizza? Who knows! There are lots of good guesses. However, I found no Internet consensus. Maybe Italy, maybe Greece, maybe Eygpt. I am sure every culture wrestles with its own claim to pizza fame. For me, I can imagine a caveman flattening out a bread textured mushroom or gourd with his club to make a ‘plate’, slapping down some pieces of the bloody game and a few leaves, maybe topping with some curdled goats milk and throwing it on the fire to heat up. He would eat the whole thing and call it good. And where did this caveman reside? Chicago? Italy? Armenia? Surely there must be an undiscovered sketch of the first pizza carved in a rock somewhere. Or a yet-to-be found fossilized pepperoni supreme buried in a tomb.
Well, whatever, it was interesting to read about the various forms of pizza and of some of the topping origins. Some traced the first pizzas to early Greece where they topped pita bread with assorted foods like goat cheese and olives; others wrote of Italians finally getting up the courage to taste the tomato. Up until about the 16th century Italians thought tomatoes were poisonous. I wonder who they got to try the first one? A Pagan?
In this country, it is generally accepted historically that Gennaro Lombardi opened the first pizzeria in New York City in 1895. And that Chicago reigns supreme with the invention of the deep dish pizza.
But another pizza style that is often overlooked, and wonderful is the Armenian meat pie. It is close to a meat-covered pizza but without a dipping sauce. You can find these pies ready-made in LA, San Francisco, and New York. Here follows a recipe to make some yourself.

Armenian Meat Pie.
Filling:
Combine:
One pound of lean ground beef.
One large can of whole tomatoes was crushed and drained.
One medium yellow onion finely chopped
One small green bell pepper seeded and finely chopped.
One teaspoon of crushed garlic or to taste.
One-quarter cup chopped parsley
One tablespoon fresh mint leaves finely chopped
One tablespoon tomato paste
One-half teaspoon of each paprika and allspice.
Salt and pepper
One portion of ready-made pizza dough.
( Or you can find a from-scratch recipe anywhere on the web or cookbook. But why work so hard?)
Divide into 12 balls and flatten into 6-7 inch discs. Place the discs on a lightly greased baking sheet and let rise slightly. Then spread the meat sauce over each disc coming close but not up to the edge. Bake at 375 degrees 25 – 35 minutes.
Here’s a quick and easy veggie pizza recipe.
Two packages of dinner rolls. Unroll and place flat on a baking sheet folding up the edges to form a crust edge. Bake for about 7 minutes and cool.

Topping:
Two eight-ounce packages of cream cheese softened with three quarter cup salad dressing and one-quarter cup skim milk, one teaspoon dillweed, and one teaspoon of basil. Garlic salt to taste.
Spread the mixed ingredients over the cooled crust. Cut up broccoli, cauliflower, onions, green and red bell peppers, carrots, and black olives and sprinkle over top. Press this into the cheese topping slightly. Add some grated Romano and Parmesan cheese and bake in the lower portion of your oven for 10 minutes or so.
Etiquette tip: Amy Vanderbilt says that while eating pizza with a fork and knife is ok, generally you can just go for it and use your hands, that’s what they’re there for. But use a napkin and forget to use the tablecloth.
Wines that go good with pizza?
Chardonnay, Beaujolais, and Chianti go well with cheese pizzas.
Pinot Grigio, Pinot Gris or White Zinfandel with pepperoni.
Chardonnay or Syrah with sausage or mushroom and onion.
Sauvignon Blanc with veggie pizza
Sauvignon Blanc or Reisling with Hawaiian.
We prefer ice-cold beer on tap. Sorry. 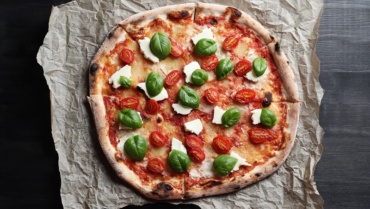 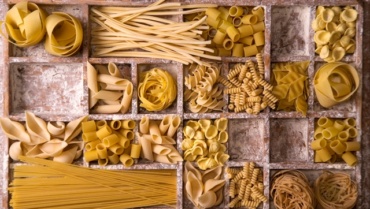 Garden Grove, The Different kinds of pasta in Italian Food